Home / About Us / History

Check out a brief historical timeline of significant achievements and milestones.

“In 1948, under the direction of Angus Campbell and Robert Kahn, the Survey Research Center (SRC) at the University of Michigan, with financial support from the Social Science Research Council (SSRC), carried out what it viewed as a pilot study of the national electorate. As Campbell and Kahn noted in their 1952 summary of that study, Lazarsfeld, Berelson, and Gaudet (1944) showed the power of the systematic survey for understanding political behavior with their study of Erie County, Ohio, carried out around the 1940 election. The 1948 study was the national, scientific application of the method. This study interviewed 577 respondents twice, once before and then, again, after the election. The respondents were drawn using probability sampling…” Read more from “The Michigan, then National, then American National Election Studies ,” by Nancy Burns (2006). 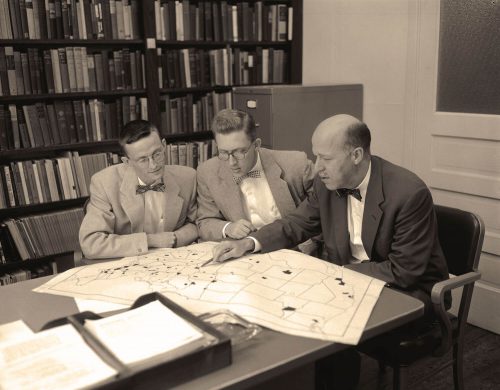 The Origins of ANES

For twenty-five years prior to the creation of the American National Election Studies, the Survey Research Center and the Center for Political Studies of the Institute for Social Research at the University of Michigan carried out an unbroken series of national election studies. The Michigan studies covered all thirteen presidential and midterm elections between 1952 and 1976. In addition to providing the basis for many books, monographs and journal articles, by the early 1970s, the studies had become an extraordinary resource for large segments of the social science research community. Placed in the public domain by the archival and data dissemination facilities of the Inter-university Consortium for Political and Social Research (ICPSR), the Michigan studies provided the quantitative data base for a very large number of important investigations in several disciplines, supporting social research carried out by scores of investigators and utilized by hundreds of teachers and thousands of their students. Read more about ICPSR’s early years.

Uncertainties and inadequacies of funding limited the ability of the Michigan team to develop and systematically improve the study design and the measurement properties of their survey instruments. When funding was finally secured for a study, it went entirely to data collection. There was no money for evaluating the core time-series (measurements of basic political attitudes and behaviors repeated regularly over time), for elaborating more powerful study designs, or for developing measurement innovations informed by substantive and theoretical questions of general scientific merit.

Limited funding prior to 1978 also made it next to impossible to involve directly the broader research community in the planning and execution of the Election Studies. There were no funds or mechanisms in place that would allow the Principal Investigators to engage the community of users in setting research agendas or specifying new study designs or instrumentation. Nor were there funds to implement such suggestions had they been made. In short, although the national community of social scientists had unusual access to a uniquely valuable collection of contemporary as well as time-series data, prior to 1978 the Michigan Election Studies were essentially a private research venture. Social scientists outside the Center for Political Studies played little role in planning or designing the data collections on which their individual research projects ultimately depended.

In 1977, the National Science Foundation (NSF) formally established the American National Election Studies as a national research resource, charged with pursuing two major research interests. On the one hand, the rationale for NSF support to the election studies rested on the expected utility of extending the time series collection of core data. The Foundation intended that the NES studies would continue to generate data pertaining to the citizen’s social background, political predispositions, underlying social and political values, contemporary perceptions and evaluations of relevant groups and would-be leaders, opinions on questions of public policy, and participation in political life. On the other hand, ANES also accepted responsibility for improving the measurement of core concepts first created in the earlier Michigan studies, as well as for developing instrumentation and study designs that would allow new theories of voting and public opinion to be tested. There is an inherent conflict, of course, between these two interests: the persistent challenge for ANES has been to maintain time-series continuity with the past while responding responsibly to the demand for improvement and change.

Following ad hoc and partial support of the election study series carried out by the University of Michigan in the early 1970s, the Foundation made its first long-term grant to support a reorganized American National Election Studies project in 1977, providing five years of funding that carried through to mid-1982. Because of uncertainty regarding the budgets for the NSF Behavioral and Social Science programs in 1982, the Foundation invited and funded an ad hoc proposal to support the 1982 ANES study. In turn, that request was followed by Foundation approval of a proposal to fund the planning of a 1984 study. The Foundation subsequently provided a second five-year grant for ANES covering the years 1984-1988, and a third for 1989-1993.

It is worth underscoring that National Science Foundation funding in 1977 constituted a mandate to transform the Michigan Election Studies into a truly national resource, with members of the research community who use these data actively participating in their further development. A wide and diverse set of social scientists have participated in every facet of ANES activities, from definition of the time-series data to innovations in study content, design, and instrumentation. The ANES research agenda is set only after extended consultation with members of the research community; the agenda is implemented in a three-way division of labor involving the Principal Investigators and the Project Staff, a national Board and various ad hoc committees representing the different research interests in the national community as they become relevant to a given study. Active participation by individual members of the research community must remain an essential component of the ANES enterprise. As the Foundation recognized over a decade ago, even though large-scale, multipurpose social research rests on the relatively complex coordination of groups and organizations, the ultimate objective is to enable creative work carried out by individual scholars.